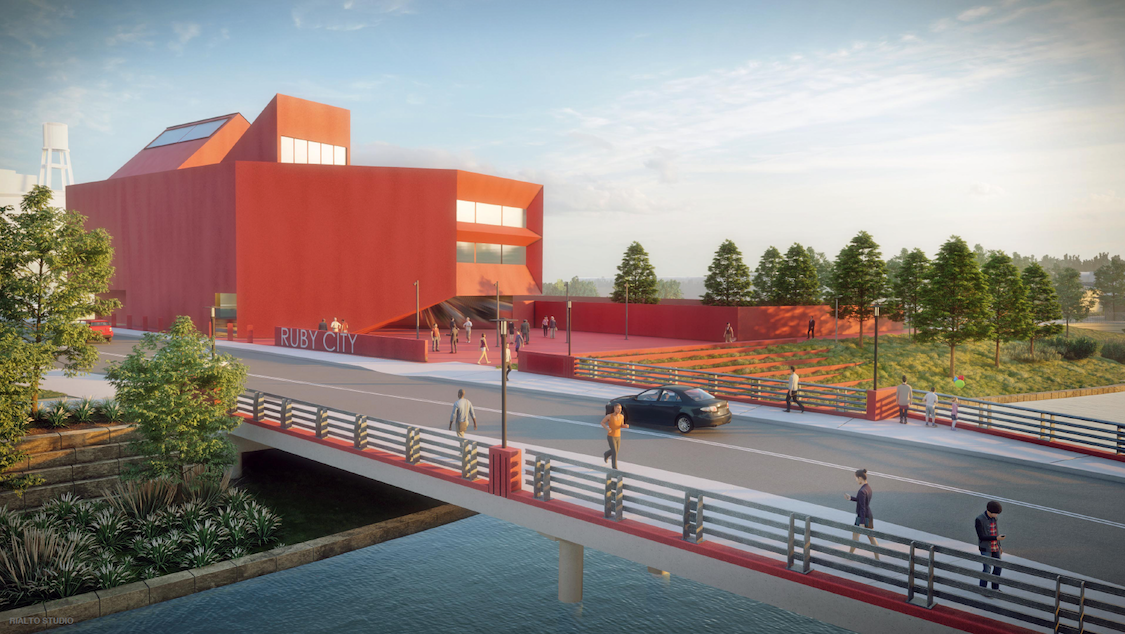 November 20, 2020 – Ruby City, San Antonio’s contemporary art center, announcesthe expansion of its campus as a part of phase two of the San Pedro Creek Culture Park extension project. Designed by Adjaye Associates and Alamo Architects, the teams behind the center’s award-winning building, this expansion will directly integrate Ruby City with San Pedro Creek and will symbolize the completion of Ruby City’s campus.

Ruby City’s development will include the enlargement of its entry plaza and the creation of adjoining terracing which will descend toward San Pedro Creek, visually connecting the two. Construction is slated to be completed by early 2023.

The integration of the contemporary art center and the natural waterway represents the last phase of architect Sir David Adjaye, OBE’s vision for the campus. “Given the beauty of the landscape and San Pedro Creek’s central role in San Antonio history, we envisioned Ruby City as facing the creek and visitors entering from a plaza along the top of the creek bank long before construction began,” Adjaye says. “With the building complete, we’re now expanding the plaza down to the water with a series of red, planted terraces, echoing the mineral used in the building’s architecture and what founder Linda Pace saw in her initial dream of the Center.”

“The San Antonio River Authority designers incorporated Adjaye’s idea into this section of the Culture Park project. Since this is also where the creek changes from its historic, hard-edged, canal-like cross section into a softer, more natural channel, Ruby City’s red plaza and terrace are a transition point between the two different characters of the creek,” Alamo Architects’ founding principal Irby Hightower says.

In extending the center’s campus to the creek, the project will connect Ruby City with the San Pedro Creek Culture Park, a restored urban greenspace and linear park running along the creek into downtown San Antonio. The Culture Park is in the second of four construction phases, and, once complete, will serve as a vital infrastructure for San Antonio. Featuring innovative architectural design and public art depicting the region’s history, the urban development project aims to preserve the history of the creek, as well as provide ecosystem restoration, flood control and water management.

“The seamless connection from San Pedro Creek Culture Park to the Ruby City campus represents a vital connection between our city’s rich history and its vibrant future. The synergy between the cultural fabric of the park and Ruby City as an iconic art institution with celebrated architectural design presents amazing partnership opportunities and we look forward to collaborating with staff to develop exciting and meaningful programming,” Carrie Brown, public art curator with the San Antonio River Authority, says.

In total, the San Pedro Creek Culture Park will add an additional four miles of walking trails and 11 acres of landscaping along the creek. Once complete, it is expected to generate a $1.5B economic impact for the San Antonio region, according to the River Authority. More information can be found here.