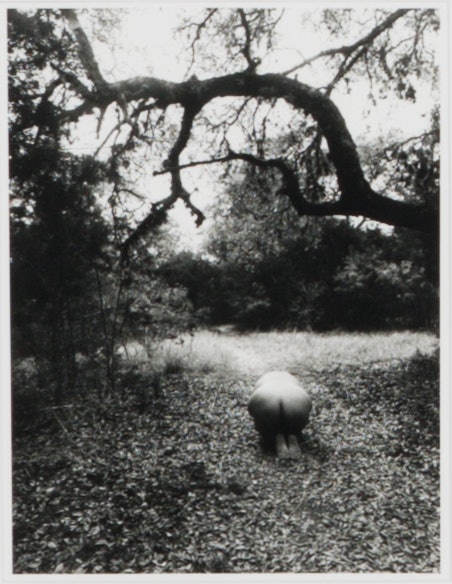 Select a work from the Ruby City Collection:

How would you describe this work in 3 words?

Why does this work stand out to you?

Laura Aguilar’s Stillness photographs stand out in their simplicity (nudes in a landscape) and in the complexity of their meaning.

Her obese, brown body is not the central subject of these photographs but is part of the arid Texas landscape where her body becomes a boulder or part of the light and dark shadows of a rocky terrain.

Having been raised by strong, socially active, large, Latina women, these images bring great comfort to me. I’m also filled with pride by the artist’s bravery in photographing her body without shame and with as much beauty and honesty as the desert landscape itself.

By contrast to the serenity evoked by these images, I am also reminded of this same Texas landscape as a contested territory that in the early 19th century would have been predominantly inhabited by brown bodies like Laura’s; I am reminded of the region’s history of violence, colonialization, displacement and subjugation of indigenous people.

What other artists does this piece remind you of? Why?

Ana Mendieta but probably Edward Weston even more so.

I’m a little hesitant to draw this comparison because art by Latinos and Latinas is sometimes compared to masterworks by white males in order to give them the stamp of validity.

But in looking at Aguilar’s Stillness series, I’m reminded of Weston’s 1930s nudes taken in New Mexico.  In particular, an interesting similarity is that in Weston’s nudes and Aguilar’s nude photos of herself, the figures always avert their gaze from the viewer.

Some quick / brief information about Laura: